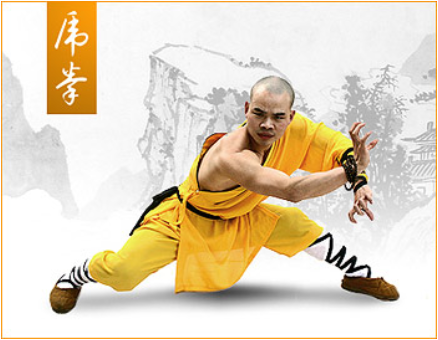 The Tiger style is characterized by its extensive footwork, acrobatic kicks, low, wide stances, and unique fist position (where the thumb is curled in the same manner as the other fingers, rather than wrapped around them). According to Master Shi Yan Xiu, this style is the most externally focused style in the Shaolin arsenal. The longer the student practices, however, the more he or she will come to rely solely on internal power.

The focus of the White Crane style is to make less use of physical strength, stressing evasion and strategic attacks to vulnerable areas instead.  This style is especially well-suited for women's self-defense as it is not purely strength-based.

The Snake style is on the fluidity of the movements. Straight

punches, butterfly palms, the hook, upper cut, and back fist

are the primary cornerstones of this technique. Thrusting

fingers resembling snake attacks is one of the distinguishing

features of this form, hence the name "Snake Style."

There are multiple kick techniques including below-the-knee kicks. 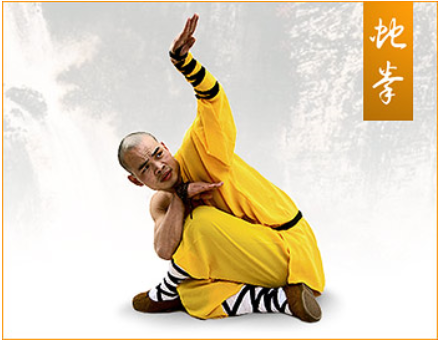 The Leopard style is on speed and angular attacks. The leopard does not rely solely on strength like the Tiger, but instead relies on speed and outsmarting the opponent., The Leopard practitioner will focus on his or her elbows, knees, low kicks, and Leopard punches in order to build speed. 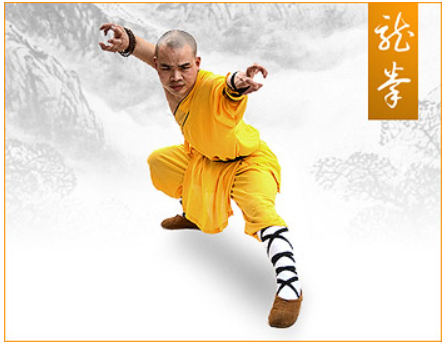 The Praying Mantis style focuses on "sticky hands" - the use of the forearms with the elbows tucked into the chest, the claw-like fingers and the quick explosive actions visually resemble the movements of a praying mantis preparing to strike its prey.

Monkey style is one of the more acrobatic styles. Movements

tumbling. The staff plays a prominent role in weapons

training, with practitioners using it to attack, defend

The flamboyant movements and sometimes comic actions of the monkey style have made it a popular style. 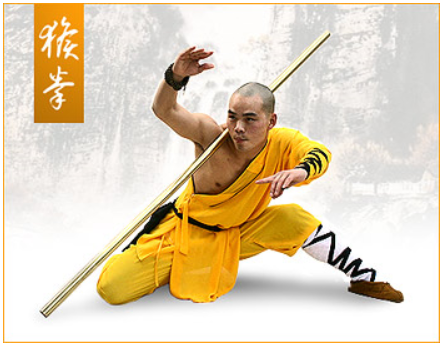 The following information is from From Wikipedia, the free encyclopedia https://en.wikipedia.org/wiki/Five_Animals

In the Chinese martial arts, imagery of the Five Animals (Chinese: 五形; pinyin: wǔ xíng; literally: 'Five Forms')—Tiger, Crane, Leopard, Snake, and Dragon—appears predominantly in Southern styles, especially those associated with Guangdong and Fujian Provinces. An alternate selection which is also widely used is the crane, the tiger, the monkey, the snake, and the mantis.

The Five Animal martial arts supposedly originated from the Henan Shaolin Temple, which is north of the Yangtze River, even though imagery of these particular five animals as a distinct set (i.e. in the absence of other animals such as the horse or the monkey as in T'ai chi ch'uan or Xíngyìquán) is either rare in Northern Shaolin martial arts—and Northern Chinese martial arts in general—or recent (cf. wǔxíngbāfǎquán; 五形八法拳; "Five Form Eight Method Fist").

In Mandarin, "wǔxíng" is the pronunciation not only of "Five Animals", but also of "Five Elements", the core techniques of Xíngyìquán, which also features animal mimicry (but of 10 or 12 animals rather than 5) and, with its high narrow Sāntǐshì (三體勢) stance, looks nothing so much like a Fujianese Southern style stranded in the North.

This is a dynamic list and may never be able to satisfy particular standards for completeness. You can help by expanding it with reliably sourced entries.

Although the technique is mainly associated with the tiger, dragon, snake, crane and leopard, many other animal styles have been developed:

According to legend,[citation needed] Jueyuan, a 13th-century Shaolin martial artist, used the original 18 Luohan Hands as a foundation, expanding its 18 techniques into 72. In Gansu Province in the west of China, in the city of Lanzhou, he met Li Sou, a master of "Red Fist" Hóngquán (紅拳). Li Sou accompanied Jueyuan back to Henan, to Luoyang to introduce Jueyuan to Bai Yufeng, master of an internal method.

They returned to Shaolin with Bai Yufeng and expanded Jueyuan's 72 techniques to approximately 170. Using their combined knowledge, they restored internal aspects to Shaolin boxing. They organized these techniques into Five Animals: the Tiger, the Crane, the Leopard, the Snake and the Dragon.

Jueyuan is also credited with the Northern style "Flood Fist" Hóngquán (洪拳), which does not feature the Five Animals but is written with the same characters as the Southern style Hung Kuen, perhaps the quintessential Five Animals style.

Moreover, as in the Southern Hung Kuen, the "Hóng" character (洪) in Hóngquán actually refers to a family name rather than its literal meaning of "flood." However, the two styles have nothing in common beyond their shared name.

The "Five Animal play" (五禽戲, Wu Qin Xi) are a set of qigong exercises developed during the Han dynasty (202 BC – 220 AD). Some claim the author of this Qi Gong sequence to be Hua Tuo, however Yang Jwing-Ming suggests it was the Taoist Master Jiun Chiam and Huatuo merely perfected its application and passed it onto gifted disciples including Wu Pu, Fan E, and Li Dangzhi.

The first animal is Tiger. It relates to the wood element, the season of spring and therefore the liver and gallbladder. The liver's emotion is anger and has many important functions including storing blood (Xue), ensuring the smooth movement of qi in the body and housing the ethereal soul (hun). Liver Xue nourishes the sinews, therefore, allowing physical exercise. The liver is often compared to an army general because it is 'responsible' for the smooth flow of qi, essential to all physiological processes of every organ and part of the body. The hun provides the mind (shen) with inspiration, creativity and a sense of direction in life. The emphasis of this exercise is grasping and stretching. By reaching up to bring down Heaven and reaching down to draw up Earth grasping is encouraged; which relates to sinews and therefore the liver. Rolling through the spine stimulates both yin and yang of ren mai and du mai channels activating the microcosmic orbit. This is then completed with a slow 'stalking' forward bend and sudden shout (release of anger) as the Tiger catches its prey with vigor while standing on one leg, to stretch the sinews while activating the jing-well points at the tips of the fingers, opening PC-8 and incorporating another important Wood trait – balance

The second animal is Deer. It relates to the water element, the season of winter and therefore the kidneys and bladder. The kidneys emotion is fear and is often referred to as the "root of life" as they store essence (jing). Jing determines basic constitution, is derived by our parents and established at conception. The kidneys are the foundation of yin and yang in the body and therefore every other organ and govern birth, growth, reproduction and development. They also produce marrow, control bones and the Gate of Life (Minister Fire), while housing willpower (Zhi). By twisting the torso, the energy of one kidney is opened while the other is closed creating a pump to regulate chong mai and therefore yuan qi. Fire (heart) and water (kidney) must connect energetically to maintain health. The hand gesture replicating horns calms Shen and connects with the heart by keeping the middle fingers in touch with the palms via the pericardium and san jiao channels. The eyes are the 'window' to shine and are smiling and joyous as we turn to look at the back heel and medial malleolus (kidney channel), also connecting fire.

he third animal is Bear. It relates to the earth element, the season of late summer and therefore the spleen and stomach. The spleens emotion is worry and is the central organ in the production of gu qi; from the food and drink, we ingest. The spleen's transformation and transportation of gu qi are paramount in the process of digestion which is the basis for the formation of qi and xue. The spleen is where the intellect (yi) is said to reside and is responsible for applied thinking and the generating of ideas, memorizing and concentration. This animal is cumbersome and its awkward traits are expressed in each movement. It starts off with circular abdominal massage to aid digestion by warming and supporting spleen yang, using the entire upper torso to move the hands. The arms are then poised to open and stretch the armpit activating the spleen's close relationship with Heart and Liver (Heart is the 'mother' of spleen and liver stores xue) by stretching the flanks. The palms are empty to open PC-8 as the hip is raised to shift the leg forward while keeping the knee straight. The swinging torso and heavy step activates kidney yang to supports spleen yang in heating and 'cooking' food.

The fourth animal is Monkey. It relates to the fire element, the season of summer and therefore the heart and small intestine. The heart is considered the most important and therefore the 'emperor' of the internal organs. It relates to the emotion joy and its main function is to govern and circulate xue in the vessels to nourish tissues and house the mind (Shen). Shen is used to indicate the entire sphere of mental and spiritual aspects of a human being and therefore encompasses hun, Zhi, yi and corporeal soul (po). Similar to the heart, the monkey is forever moving like the flickering of a flame. With the first exercise, suddenly lifting the hands with hook palms up towards the chest, the shoulders towards the ears and balancing on the toes with the monkey looking to the side, squeezes the heart and pumps xue as you release down again. The second part calms Shen by clearing the mind (moving the branch) to grasp the peach (fruit of heaven) with the thumb inside of the palm to hold the Hun within. Grasping in this exercise relates to the liver's ability to hold and store xue, while the lifting of the back heel activates the Kidneys also supporting the Heart. The peach is then brought into view but is too heavy and must be supported as the monkey enjoys his find and soon to be 'treat'.

The fifth animal is Crane. It relates to the metal element and the season of autumn and therefore the lungs and large intestine. The Lungs emotion is sadness and governs qi and respiration, while being in charge of inhalation and the regulation of water passages. They are the intermediary organ between man and his environment, likened to a prime minister in charge of qi regulation particularly in the blood vessels to assist the heart in controlling blood circulation. The lungs house po the most physical and material part of the human soul; sensations and feelings. The activation of the microcosmic orbit is again featured by firstly working the spine in a concave fashion. The shoulders are raised and squeezed into the neck to squeeze the heart and pump xue while the arms are brought up to mimic a beak and the tailbone is thrust out. The arms are brought back along with one leg to mimic gliding. The second part of the exercise regulates the ascending (liver – xue) and descending (lungs – qi) function of qi in the Lungs. The ultimate yin and yang expressed by breathing in (kidneys) and breathing out (lungs) connects these two organs to regulate xue and assist the heart. The rhythm created by the up and down movement of the body, the opening and closing of the arms (lung and large intestine channels) and the in and out breath helps us adapt to the rhythmical changes of the seasons. The final stretch upwards on one leg stretches the flanks and therefore the liver and gall bladder channels to balance with the Lungs. The lungs are said to be 'spoilt' being the last organ to start working just after birth and are therefore fragile and sensitive to change, explaining why gentle exercise is preferred.