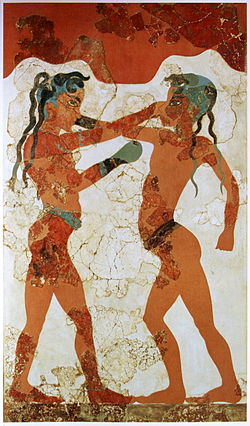 Martial arts are codified systems and traditions of combat practices, which are practiced for a number of reasons: as self-defense, military and law enforcement applications, mental and spiritual development; as well as entertainment and the preservation of a nation's intangible cultural heritage.

Although the term martial art has become associated with the fighting arts of East Asia, it originally referred to the combat systems of Europe as early as the 1550s. The term is derived from Latin and means "arts of Mars", the Roman god of war. Some authors have argued that fighting arts or fighting systems would be more appropriate on the basis that many martial arts were never "martial" in the sense of being used or created by professional warriors.

Martial arts may be categorized along a variety of criteria, including:

The traditional martial arts, which train armed combat, often encompass a wide spectrum of melee weapons, including bladed weapons and polearms. Such traditions include eskrima, silat, kalaripayat, kobudo, and historical European martial arts, especially those of the German Renaissance. Many Chinese martial arts also feature weapons as part of their curriculum.

Sometimes, training with one specific weapon will be considered a style of martial arts in its own right, which is especially the case in Japanese martial arts with disciplines such as kenjutsu and kendo (sword), bojutsu (staff), and kyudo (archery). Similarly, modern Western martial arts and sports include modern fencing, stick-fighting systems like canne de combat and jogo do pau, and modern competitive archery.

Many martial arts, especially those from Asia, also teach side disciplines which pertain to medicinal practices. This is particularly prevalent in traditional Asian martial arts which may teach bone-setting, herbalism, and other aspects of traditional medicine.[3]

Martial arts can also be linked with religion and spirituality. Numerous systems are reputed to have been founded, disseminated, or practiced by monks or nuns.

Throughout Asia, meditation may be incorporated as part of training. In those countries influenced by Hindu-Buddhist philosophy, the art itself may be used as an aid to attaining enlightenment.

Japanese styles, when concerning non-physical qualities of the combat, are often strongly influenced by Mahayana Buddhist philosophy. Concepts like "empty mind" and "beginner's mind" are recurrent. Aikido, for instance, can have a strong philosophical belief of the flow of energy and peace fostering, as idealised by its founder Morihei Ueshiba.

Traditional Korean martial arts place emphasis on the development of the practitioner's spiritual and philosophical development. A common theme in most Korean styles, such as taekkyeon and taekwondo, is the value of "inner peace" in a practitioner, which is stressed to be only achieved through individual meditation and training. The Koreans believe that the use of physical force is only justified through defense.

Systema draws upon breathing and relaxation techniques, as well as elements of Russian Orthodox thought, to foster self-conscience and calmness, and to benefit the practitioner in different levels: the physical, the psychological and the spiritual.[4]

Some martial arts in various cultures can be performed in dance-like settings for various reasons, such as for evoking ferocity in preparation for battle or showing off skill in a more stylized manner. Many such martial arts incorporate music, especially strong percussive rhythms.